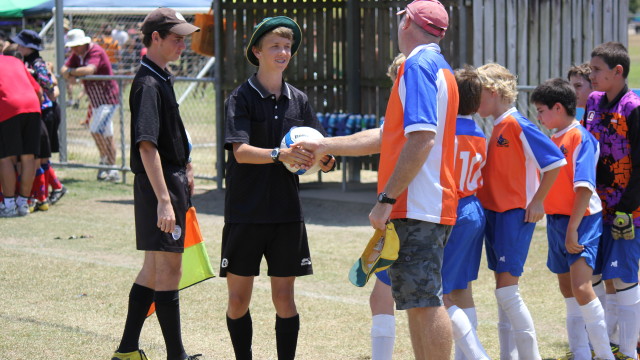 TJSA would like to remind everyone – players, coaches and spectators – about appropriate conduct towards referees and assistants.

Earlier this year Atherton Football Club, with the support of TJSA, ran a referees course to help improve the standard of refereeing and increase the number of qualified refs available to officiate at games hosted on the Tablelands. This was a direct response to issues raised in previous years about the lack of appropriately qualified refs. The course was well attended and we now have significantly more senior and junior refs available for games. We also decided that these refs will receive a small payment for giving up their time to officiate at games. This does not mean that they are paid professionals and all of them are still learning the art of refereeing. There is no doubt that the standard of game officials has improved this year and, if we commit to supporting referee development, it will continue to improve each year as our officials get more experienced.

Referees and assistant referees (who run the sidelines) are an integral part of the game and are needed in order to provide any kind of football competition. Please consider the potential mayhem amongst players, coaches and spectators if we did not have officials running a game. Please also consider that everyone makes mistakes and officiating in a game with 22 players on a field, two coaches issuing instructions to players and spectators yelling support is never easy.

Therefore it is disappointing to hear that our officials are routinely being criticised by players, coaches and spectators at games. This is not acceptable.

Any player who openly criticises a referee can expect to be cautioned with a yellow card and, if they swear at a referee, they will be red carded and suspended for at least one match. This applies to coaches as well. Spectators can be banned from attending football games for inappropriate conduct towards game officials.

Coaches are expected to show respect at all times towards the match officials. This is junior sport and, as such, coaches are role models for their players.

Spectators are just that. It is easy to criticise whilst sitting back and watching a game. Spectators should remember that they are not out in the middle, in the midst of a fast paced game, nor are they running up and down a sideline, in some cases straight after playing a game themselves. Many of our game officials are young players who are simply trying to do a good job. They do not need adults criticising them. What they do need is support and appreciation for doing a hard and, at many times, thankless job.

The process for complaints against referees is very simple

When our TJSA players, coaches and spectators are away at JRF hosted matches they are expected to show the same level of respect for any JRF game officials. This is not negotiable. The TJSA and JRF Associations are committed to ensuring our game officials are respected and appreciated and will not condone negative behaviour toward them.

Please help us to promote our game in a positive way for our junior players and game officials.